How do I stop my puppy picking up and eating everything in the garden? 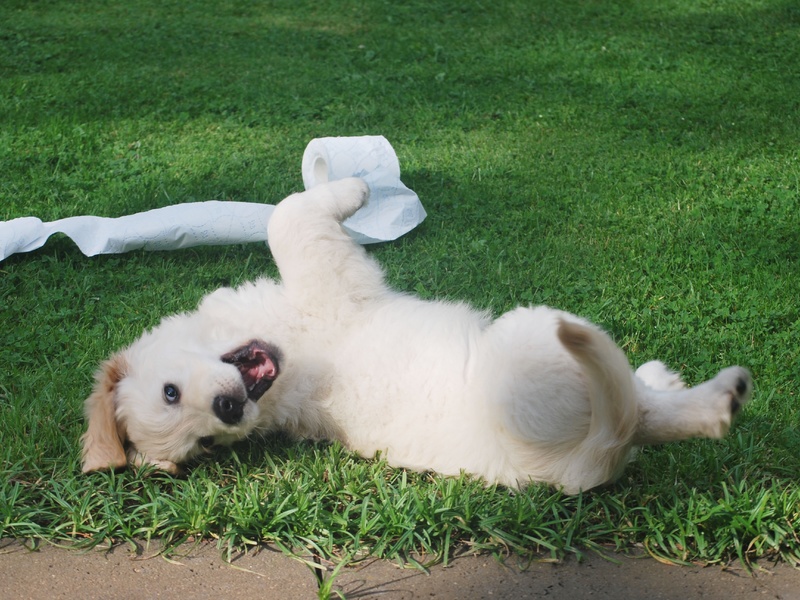 This is something that I get asked A LOT and it is totally normal for a puppy to be keen to pick things up with their mouths. Here I will take you through some do's & don’ts so we can help them understand this isn't ideal.

Firstly, let’s look at why do they do it.

They are only a few weeks old and have been taken away from the only normality they knew…their mother and litter. They’re small, lack in social skills and simply do not know what we want them to do. We’ve got to cut them some slack and give them time to learn.

Having said that, picking things up and chewing/eating them can be dangerous and it’s not something we want our puppies to do forever.

Remember a dog's senses are different to ours and they investigate things with their nose first, then their eyes and usually at the same time they’ll use the teeth to pick it up/see what it is.

They are built differently to us humans and we must remember that picking things up with their teeth is totally normal to a dog or puppy, it’s how we deal with it that will make all of the difference.

What can we do about it?

Now we can appreciate that the chances of our puppies picking things up with their teeth is sort of inevitable, let’s chat about what we can do.

Don’t give your puppy the chance to practise what you don’t want them to do.

Don’t let them go outside alone just yet whilst they’re doing this, pop a lead on them in the garden, puppy proof the house (and garden) and move things out of their reach.

If you don’t want your puppy to have the chance to nibble it – put it away!

Remember your reaction is key.

I’m not trying to make anyone feel bad if they do this, I did this, lots, I just want to bring to your attention your reaction will make or break these circumstances. If your puppy picks something up and you’re immediately focusing on them, talking to them and even chasing/following them then guess what…it’s the BEST game EVER to your puppy!

They can get you to follow them and it turns in to a fun game.

Rule of thumb is if it isn’t an emergency (they haven’t got something that will hurt them or they don’t usually swallow it), then whatever they’ve got you have to accept is gone. Leave them to do the parading and accept that you should’ve moved it out of the way. When they’re calmer you can wander over to them with a toy and do a swap.

If it is an emergency item or they do normally swallow – you’ve got to be with them so you can stop them getting near enough in the first place.

Always swap with them.

If your puppy has something you would like them to give to you, you’ve got to offer them something. Always swap rather than take.

We don’t want puppies who turn towards resource guarding as they assume everything, they have you’ll take away from them.

Whatever you have to swap has got to be BETTER than what your puppy already has. Don’t assume the same things will work all of the time, sometimes they won’t. Be prepared to crack open the chicken for this.

Over time your puppy will learn that they don’t have to guard stuff and you’ll eventually be able to encourage them to leave stuff without bribing them.

In the early days you’ve got to bribe. These are small, young pups and they need time to learn.

They don’t know what No or Drop means.

Remember our example before? Just because we say 'No' or 'Drop' to our puppies (even in a serious tone) when they have something doesn’t mean they know that it means. So when Fido picks something up and his human says ‘No’ or ‘Drop it’, he won’t know what you want him to do. They don’t speak English.

Instead, he’ll go on your body language and interaction you're giving him. If he can get you to chase him and play the game…even better!

If you haven’t taught your puppy what drop means, as in it means to open your jaws – then your puppy won’t do it.

The stuff to remember

If your puppy always picks things up in the garden – supervise them, be on lead and encourage them away from things in the first place.

If your puppy is picking things up around the house – puppy proof your pad! Move stuff out of the way.

Don’t chase them, shout at them, forcibly take stuff from them – you’re teaching them the wrong thing. You’re making them see that you will always take stuff away from them, so they’ll avoid you or guard the things they have

Always SWAP when your puppy has something, this has to be better than what they’ve got (remember you’re rewarding the drop not the stealing).

Teach them what ‘Drop’ means, help them learn and don’t only train this when you need them to drop something. Practise it all of the time then when you need it to work, the chances are higher.

We’ve got tons of other Blog topics, if something is on your mind just use the search bar at the top of the page.